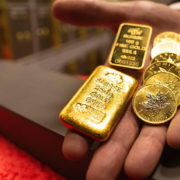 Gold prices look to end the year more than 15% higher, on track to post their biggest annual climb in nine years.

“Ongoing uncertainties, both macroeconomic and geopolitical have provided support for both types of buying,” he said.

Milling-Stanley said he was surprised with the speed of gold’s move up through the $1,350 level this past summer. That “constituted the upper bound of the trading range that had been in existence for six years, since the spring of 2013,” he said.

Helped by Federal Reserve Chairman Jerome Powell saying in June that he would “make a mid-cycle adjustment and give the markets the interest rate cut they had been clamoring for, gold rapidly rose to over $1,550 an ounce by September,” said Milling-Stanley.

After cutting interest rates three times this year, the U.S. central bank on Dec. 11 held its benchmark interest rate steady at a range of 1.5% and 1.75%.

Gold has some gains in the wake of the latest policy announced, but it’s done very well from a larger time perspective.

In the decade from early 2001 to late 2010, prices for the metal climbed from $250 an ounce to $1,250 an ounce, for an “average gain of $100 per year,” said Milling-Stanley. He largely attributed that rise “to increasing jewelry purchases throughout the emerging markets on the back of sustained good economic growth in the region.”

“Speculative activity” drove prices up by $500 in just nine months in 2011, then as that speculative interest waned, gold prices fell back to the $1,250 level in the spring of 2013, he said, adding that while he is “hoping for modest, sustainable gains in gold over the coming years,” he is also “acutely conscious of the power the speculative community can have over gold in the short term.”

Next year, however, gold may face some challenges.

“The uptick in inflation prospects is likely to be challenging for gold” in the first half of 2020, said Rob Haworth, senior investment strategist at U.S. Bank Wealth Management. “Higher inflation likely leads to higher interest rates, which could dampen demand or gold.”

A “more stable global economic regime, with or without a trade deal, would also undermine safe-haven demand” for the precious metal, he said. So a further gain in gold would likely “require additional interest rate cuts and rising supply of negative interest rate bonds around the world,” says Haworth, though he also cautions that an uptick in inflation expectations would undermine these catalysts.

Meanwhile, looking much further out to the next decade, Milling-Stanley said it’s “possible” for gold to see similar moves to the ones it’s seen in the past decade.

“I don’t believe the speculative community will want once again to risk missing the first 10 years of a bull market in gold, and the first $1,000 rise in the price, as it did at the beginning of this century,” said Milling-Stanley.

If you would like to learn how to take advantage of the increased value of Gold via a solid investment, however you keep control of your funds, please email support @ forshawcapitalgroup.com for a no obligation discussion and brochure.

Scan the QR code or copy the address below into your wallet to send some bitcoin:
Donate via Installed Wallet
[X] Click Here to Hide Donation Details

Scan the QR code or copy the address below into your wallet to send bitcoin:
Donate via Installed Wallet
[X] Click Here to Hide Donation Details

Scan the QR code or copy the address below into your wallet to send some Ether:
Donate via Installed Wallet
[X] Click Here to Hide Donation Details

Scan the QR code or copy the address below into your wallet to send some Litecoin:
Donate via Installed Wallet
[X] Click Here to Hide Donation Details

Scan the QR code or copy the address below into your wallet to send some Monero:
Donate via Installed Wallet
[X] Click Here to Hide Donation Details

Scan the QR code or copy the address below into your wallet to send some ZCash:
[X] Click Here to Hide Donation Details

We use cookies to ensure that we give you the best experience on our website. If you continue to use this site we will assume that you are happy with it.Ok
Scroll to top